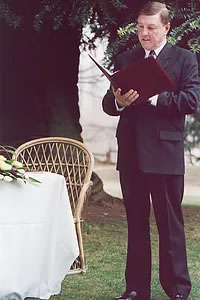 Roger Thomson has been a civil marriage celebrant in Australia for more than 35 years; having celebrated his first marriage ceremony at the age of 26. Roger began his career with the Registrar of Births,  Deaths and Marriages, A.C.T, taking charge of the office in 1972 before occupying the position of Registrar in the 1990’s.

During his 23 years with the Registry Office, Roger solemnised more than 5,000 marriages and introduced many reforms to the ACT community and to Australia. These included legislation to introduce changes in civil marriage practices to reflect the wishes of a changing society.

Now as a registered celebrant for 18 years Roger has travelled from Cairns to Melbourne, as a celebrant, for more than 2,000 couples.  His local area is the south coast of N.S.W. (Berry to Bermagui) and the A.C.T.

Roger has a  Bachelor of Arts in Sociology (ANU), a Graduate Diploma in Law, a Diploma in Management, is a JP and is a past President (and remains a member) of the Australian Federation of Civil Celebrants. As a family man Roger has always recognised the importance of personal relationships as a foundation of society and has adopted this philosophy into his everyday dealings with clients.

He offers freedom to choose the ceremony you want using his own resource material or your special words. He has a friendly, yet professional and flexible approach to your needs with a warm sense of humor and sensitivity to ensure he recognises your day, your way!